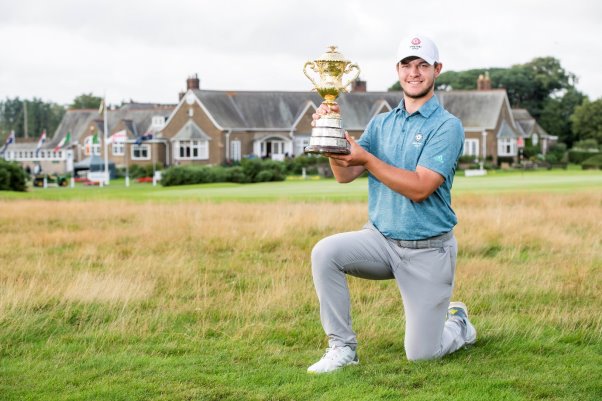 Sam Bairstow admitted the jolt of seeing his lead whittled down to two shots with three holes to play gave him the extra spur needed to push on and win the 2021 Brabazon Trophy.

The Yorkshireman played stunning golf all week at Ganton Golf Club to win the English Men’s Open Amateur Stroke Play Championship with a total of -11 (273).

This was achieved thanks to an opening round of 66 and three consecutive scores of 69.

Bairstow, though, had to fight off a late charge from Zach Chegwidden to win by two shots. Chegwidden’s seven under par final round 64 thrilled the galleries and teed up an exciting finish to four days of tough competition.

Bairstow started the final round – delayed by half an hour due to 54mm of rain falling on the Vale of Pickering overnight – with a five-shot lead over Kent’s Josh Bristow. Five holes into his final round the England international had stretched that lead to six thanks in part to a six-foot birdie putt at three.

By the seventh hole, Essex’s Chegwidden had suddenly appeared in Bairstow’s rear-view mirror after three birdies in a lightning start to his round took him to within three shots of the lead. And as the duo hit the back-nine – with Chegwidden two groups ahead of Bairstow – it got even closer. Birdies at 12, 13 and 14 put the Orsett golfer firmly in the mix just two shots behind Bairstow.

The final stretch of holes at Ganton are renowned as some of the toughest in the country – even without the pressure of one of golf’s most prestigious amateur titles on the line. Chegwidden and Bairstow both parred the last four holes which gave Bairstow a two-shot winning margin – but it was closer than the bare facts suggest.

On 16, Chegwidden’s birdie putt from 40-feet stopped agonisingly on the edge of the cup. And on 17, Bairstow had to hole a slippery ten-foot put down the slope for par to give him the luxury of playing 18 without too many nerves.

After nailing the win – popularly received by a large number of fellow players who waited around to see Bairstow win the title – the champion said: “If you’d have given me two under par for the round before I started, I’d have thought I’d win by five or six. I don’t look at leaderboards, but I saw one at 15 and I noticed Zach was at nine under. It probably helped me as I knew I had to hit proper golf shots and not just feed my way round the golf course. I was happy to par the last three and get it done.It means a lot – I’ve been feeling like a win has been coming this year. To do it in my last big event feels really good.”

The George Henriques Salver – presented to the leading GB&I player aged under 20 – was shared by England boys’ squad members Josh Hill and Frank Kennedy on a score of +1.

Which statistics are most important to track during a round of golf? It’s not a trick question. Then, again, maybe it is. In some sense, ...
Read More
Close
LATEST NEWS
Boutier bags French Open title with final hole birdieAre we running out of golf balls? | NPG 93Training Aid SurveyThe Better Budget Launch Monitor? | NPG 92The Best Ball For You? | NPG 91Testers Wanted – Arccos Caddie PlatformWe Tried It: TaylorMade MySpider EX Putter Designer7 Ways To Build Unshakable Confidence For Golf5 Mental Mistakes In Golf That Tour Pros Hardly Ever MakeNordqvist tames Carnoustie to claim third major title