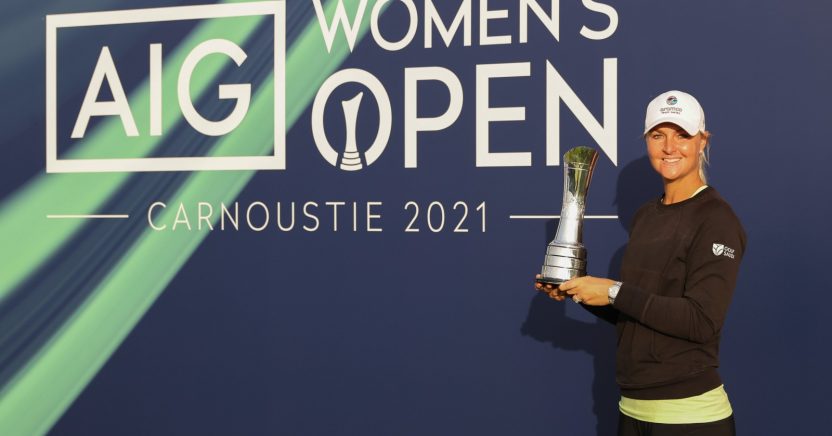 Nordqvist closed with a three-under-par 69 for a 12-under-par total and a one-shot victory over a trio of players over the famous Scottish links. She claimed the winner’s cheque of $870,000 as part of the new largest prize fund in women’s major championship golf.

Nordqvist was level with Denmark’s Nanna Koerstz Madsen on the closing hole and the 34-year-old’s solid par four was good enough to triumph as her playing partner suffered a dramatic collapse after finding the bunker with her second shot and then shanking her third into rough behind the green. The ensuing double bogey saw her drop into a tie for fifth, with Minjee Lee, who stormed up the leaderboard with a 66.

Georgia Hall, Lizette Salas and Madelene Sagstrom, all finished tied second on 11-under-par, with the latter dropping a shot on the final hole to miss out on a potential play-off.

Nordqvist, who won the Women’s PGA Championship in 2009 and the Evian Championship in 2017, ignited her final-day success with three birdies in four holes from the sixth before a key par-3 save at the testing 16th. A host of challengers mounted their bid on a star-studded leaderboard during a dramatic final day at the Angus venue, most notably Hall, who eagled both the 6th and 12th en route to her closing 67. Salas, the runner-up in 2019, also had a chance on the 18th to reach 12-under-par, but her 20-foot birdie just missed the target.

“I’ve been waiting for this for a while,” said Nordqvist. “I haven’t won one [a major] in a few years. There have been a lot of downs since then, which makes it even sweeter. My husband is from Dundee, 20 minutes away from here, and this place is truly special. I have absolutely loved it here, especially with the fans back.”

Further down the leaderboard, Scotland’s Louise Duncan claimed the Smyth Salver as the leading amateur. The 21-year-old student, who will be playing in this week’s Curtis Cup in Wales, raised hopes of a title challenge after making a birdie on the first to sit one off the lead. In the end, the reigning British Women’s Amateur champion had to settle for a level-par 72 and a tie for 10th place on seven-under-par, which secured her return for next year’s AIG Women’s Open at Muirfield.

Which statistics are most important to track during a round of golf? It’s not a trick question. Then, again, maybe it is. In some sense, ...
Read More
Close
LATEST NEWS
Boutier bags French Open title with final hole birdieAre we running out of golf balls? | NPG 93Training Aid SurveyThe Better Budget Launch Monitor? | NPG 92The Best Ball For You? | NPG 91Testers Wanted – Arccos Caddie PlatformWe Tried It: TaylorMade MySpider EX Putter Designer7 Ways To Build Unshakable Confidence For Golf5 Mental Mistakes In Golf That Tour Pros Hardly Ever MakeNordqvist tames Carnoustie to claim third major title