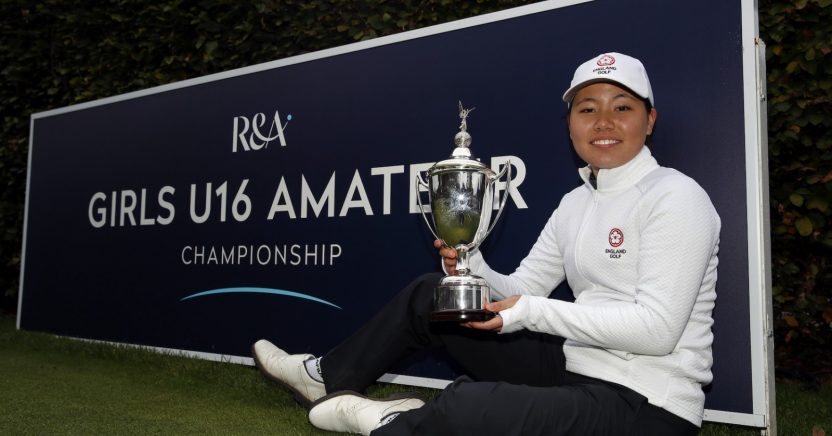 Kim, 14, who is a member at The Buckinghamshire Golf Club, made a closing birdie for a final round 71 to win the stroke play event by two shots at the Midlands venue.

Woburn’s Roisin Scanlon holed from 50 feet on the final hole to secure second place, while West Hill’s Ellen Yates bagged a valuable eagle at the same hole to move into a four-way tie for third place on three over with England’s Frankie Dezis, Scotland’s Grace Crawford and Germany’s Philipa Gollan.

Kim, who trailed Dezis going into the final round, birdied the first and second holes to make an early move, and added another at the 12th, but dropped three shots on the back nine before rallying with a closing birdie at the par-five 18th. Despite firing three birdies on the front nine, Dezis’s challenged faded on the homeward stretch, with four dropped shots in the final five holes seeing her close with a 74.

Kim, who this tournament’s U12s category in 2018 and 2019, and the English Girls’ U14s this summer, said: “This is probably the biggest win of my life. It’s a big milestone for me in becoming the player I want to be, so I’m very happy. If I went back to 2018 and told myself me that I was going to win the main title in 2021 I probably wouldn’t have believed myself, but I’m delighted to have proved myself wrong!”

Kim, who also won the U14s section at Enville, added: “I think steady golf won it for me, no drama and lots of consistency. Those are my strong points. It was nerve-wracking on the 18th, but I knew the scores and what I had to do. Having the experience of playing in these big events is great for me. This has definitely my best season yet and I’m looking forward to seeing how things progress next year.”

Final scores and video highlights can be seen at www.randa.org.